Plans to crack down on the UK’s soaring obesity rate could be scrapped after the Government ordered a review of the ‘nanny-state’ rules.

The Treasury has ordered an audit of measures already in force, as well as policies set to be brought in next month.

It means that bans on unhealthy food being displayed at checkouts, sold as part of multi-buy deals and advertised before 9pm could face the chopping block.

The sugar tax — which charges soft drink makers if their drinks are too sugar-laden — is also under threat, despite it being credited with causing Britons to consume less.

The move forms part of new Prime Minister Liz Truss’s plans to remove pressures on businesses during the cost-of-living crisis.

But anti-obesity campaigners have warned the ‘deeply concerning’ review would be ‘reckless’ and a waste of time and money. 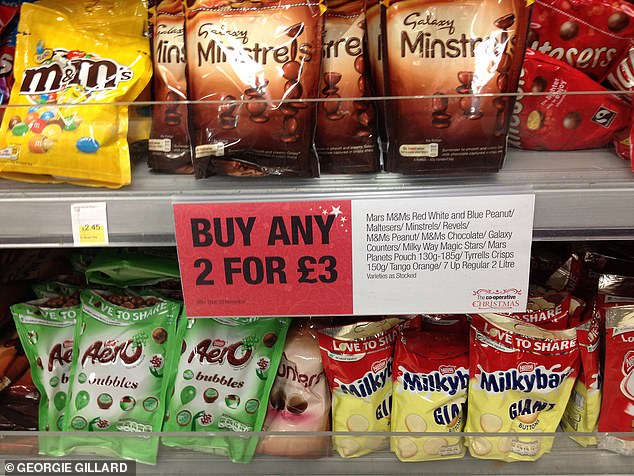 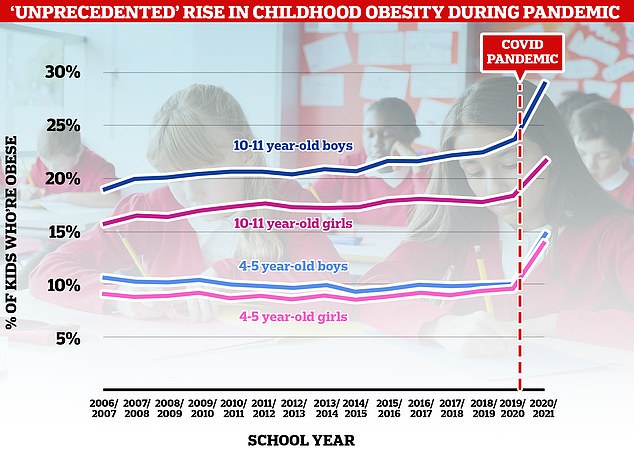 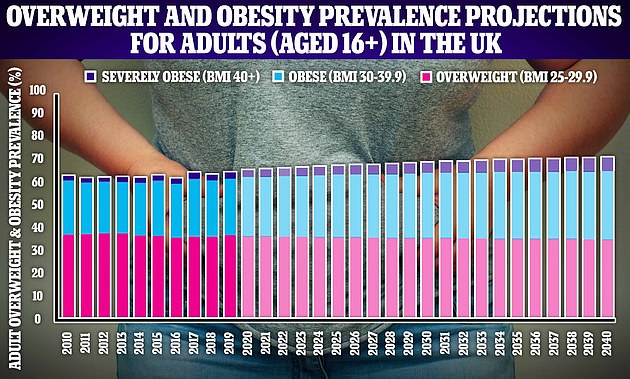 More than 42million adults in the UK will be overweight or obese by 2040, according to new projections by Cancer Research UK

WHAT MEASURES FACE THE CHOPPING BLOCK?

Proposals set out that food high in fat, sugar or salt will be banned on TV and online before 9pm.

Ministers believe the pre-watershed ban will mean less children see and are tempted to buy the unhealthy food.

Research suggests that around half of all TV food ads are for unhealthy food, rising to 60 per cent after 6pm.

And the Government was even considering whether to ban online junk food adverts round-the-clock.

Junk food will be banned from buy-one-get-one-free deals under Boris Johnson’s plans.

Data shows the UK spends more buying food products on promotion than any other European country.

Food high in fat, sugar or salt will be banned from prominent locations in stores.

These include high-footfall areas, such as checkouts and entrances.

More than 40 per cent of food and drink in prominent store locations is unhealthy, analysis from 2018 shows.

Ministers hope shops will instead promote healthier choices and offer more discount on fruit and veg.

From April, restaurants, cafes and takeaways with more than 250 staff have had to show calories on their menus.

Eating out has become more comment in recent years, with 75 per cent of Britons going to a restaurant, fast food chain or takeaway restaurant ever week.

This is causing Britons to unwittingly consume around 200 more calories per day on the days they eat out, compared to if they cooked at home.

The tax, in place since 2018, charges soft drink manufacturers 18p per litre if their drinks are too sugary.

A review found that it put Britons off buying as many soft drinks, with sales falling 10 per cent.

The UK’s entire anti-obesity strategy, mostly brought in under ex-PM Boris Johnson, could be ditched under the review, which is ‘deregulatory in focus’, The Guardian revealed.

He announced the latest package of measures in July 2020, following his battle with Covid, which saw him hospitalised for a week.

Mr Johnson said he was ‘way overweight’ when he was struck with the virus but has since built up his fitness through exercise.

Under the plans, Britons were urged to lose weight to beat Covid and protect the NHS — with dozens of studies showing the higher risk of severe illness, hospitalisation, ICU admission and death.

The policy set out that restaurants, cafes and takeaways with more than 250 staff would have to include calories on menus — a policy implemented in April.

Food high in fat, sugar and salt, was set to be excluded from TV and online adverts before 9pm and buy-one-get-one-free deals. Free refills for soft drinks were also due to be ditched.

But in May, Mr Johnson announced that the measures — which would have affected hundreds of products including pizzas, ready meals, sweets and cakes — were pushed from October 2022 to 2023 and 2024 due to the cost of living crisis.

However, a ban on displaying junk food in prominent store locations — such as the end of aisles and checkouts — was still expected to be enforced from next month.

But now, a wide-ranging Government review may see all of the policies ditched for good.

Even the sugar tax, which has been in place since 2018 and charges soft drink manufacturers 18p per litre if their drinks are too sugary, may be scrapped. A review found that it put Britons off buying as many soft drinks, with sales falling 10 per cent.

One source told The Guardian that the new Health Secretary Therese Coffey has no appetite for ‘nanny state stuff’.

But the Office for Health Improvement and Disparities, which works to reduce health inequalities, was left ‘aghast’ by the prospect of the purge of health policies, it was claimed.

Katharine Jenner, director of the Obesity Health Alliance, organisations working to reduce obesity, said setting scrapping the plans would be a kick in the teeth’.

She said: ‘We are deeply concerned by rumours suggesting that the government might drop obesity policies which are designed to put healthy affordable food in the spotlight.

‘This will not help the cost of living crisis in the short term, and in the long term would lead to serious consequences for our health, our economy and our NHS.

‘Poor diets, exacerbated by lockdown, have led to an increase in childhood obesity, and further widened existing inequalities.

‘Big, multi-national companies promote and advertise unhealthy food and drink to those on lower incomes.

‘It would be reckless and a great shame to waste Government and business time and money rowing back on these obesity policies, which are evidence-based and already in law.

‘These policies are popular with the public who want it to be easier to make healthier choices. Not implementing these evidence-based policies is a kick in the teeth to families trying their hardest to live well on a budget.’

Experts warn that soaring rates of obesity is the UK’s biggest health challenge, due to its links with chronic health conditions, such as type 2 diabetes, coronary heart disease, some cancers and strokes.

Being too big can also affect a person’s quality of life if daily activities trigger breathlessness, sweating and joint and back pain.

Rising numbers of overweight and obese people also further stretch the NHS, which is already forced to spend £6.1billion per year on treating preventable conditions caused by people eating too much.

And the figure is expected to hit £9.7billion by 2050, based on current trends.

In England, approximately 36 per cent of adults are overweight and a further 28 per cent are obese.

And experts warn, that if current trends continue, people are more likely to be obese than a healthy weight by 2030. And seven in 10 will be classed as too heavy by 2040.

Rates are also on the rise among children. One in seven youngsters in Reception were obese last April — compared to one in 10 before the pandemic.

The proportion that were too fat by the time they got to Year 6 rose to one in four, up from one in five pre-Covid.

While experts note that restrictions on offers and adverts for junk food isn’t a silver bullet, campaigners say it is an important step forward in helping Britons make healthier choices.